Credit unions topped the financial services category in the Ireland RepTrak® 2019 study. With a score of 80.3, they were far ahead of the average score of 59.0 in the sector.

Credit unions were also ranked number two out of 100 companies in the overall study, which measured the level of trust, respect, admiration and esteem for 100 of the most important organisations in Ireland. Bord Bia (the Irish Food Board) was in first place with the IRFU in third place in the overall survey.

The Ireland RepTrak® 2019 study is based on the perceptions of over 7,000 members of the public gathered during January and February 2019. Organisations were ranked on a Reputation Pulse score from 0-100. The study found that credit unions were ranked very highly for willingness to welcome people into their community.

Speaking about the achievement, ILCU Head of Communications, Paul Bailey said: “Credit unions are fully committed to their communities, and the needs of the 3.6 million credit union members across the island are always at the heart of everything they do. This award is recognition of the selfless work and tireless commitment of credit unions to the local communities they have served for more than sixty years now. As credit unions are owned by their members, the people who save with them and borrow from them, everyone – credit union members, staff and volunteers – should all be proud of this accolade.”

Commenting on the significance of the results, Niamh Boyle, Managing Director, The Reputations Agency said: “A strong reputation increases support and delivers positive business results while helping to win customers, attract the right talent, and gain support from key stakeholders. It’s driven by the touchpoints that stakeholders have with organisation – their direct experiences, what organisations communicate and what others say about these organisations. Today, organisations are more widely scrutinised based on their alignment with social causes, their behavior, their organisational values and the internal culture they create. They are no longer solely measured on what they make or how they make it.  The public are more attuned to the reputation of an organisation than ever before and, for the public, actions speak louder than words.” 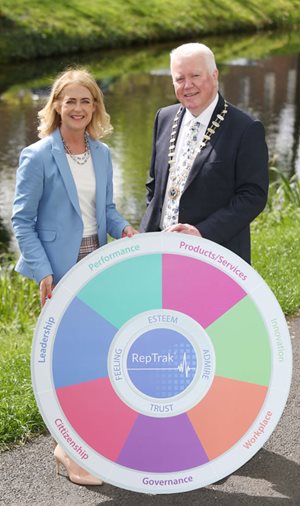