Last Saturday, 7th October saw the return of the annual Core Credit Union dlr Community 5K in Kilbogget Park. Back for the 9th year it once again proved to be a great afternoon of fun activity and inclusion.  With nearly 1,200 people of all abilities taking part, the weather played its part and aside from it being a bit windy (which made it tough on the route at times) it was a lovely afternoon to spend outside being active.  After a warm-up taken by Ashley from dlr Leisure, An Cathaoirleach, Cllr. Kate Feeney, officially welcomed everyone and started the event. 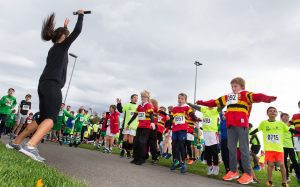 Once the hooter sounded participants ran, jogged, rolled, pushed or walked the 5k course to the finish line. Participants included hundreds of families and all fitness levels including runners, joggers and walkers as well as school groups. Everyone received an event t-shirt and refreshments with the kids also sporting an event medal for their hard work. 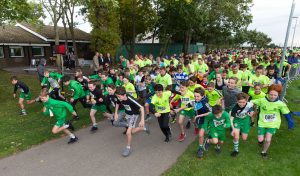 Shane McArdle, Coordinator with Dún Laoghaire Rathdown Sports Partnership, commented ‘this event has gone from strength to strength both in terms of participants and also how it engages the local community.   We really look forward to it every year as there is always a happy atmosphere with the range of ages, abilities and fitness levels adding to the inclusive nature of it. It is a wonderful example of community integration and a great way to kick off the Dún Laoghaire-Rathdown Festival of Inclusion.’