Notice is hereby given that the 52nd Annual General Meeting of Core Credit Union Ltd will take place in Dún Laoghaire Evangelical Church on Tuesday 5th December 2017 at 7:30pm.  All Members are invited to attend.

Parking: Parking is available on the grounds and surrounding areas

Refreshments will be served following the meeting.

The Members Car Draw will be run on the night along with a free raffle for those attending.

When you join Core Credit Union you become a Member not a Customer.  This is an extremely important difference. Whether you have €100 in shares of €50,000 in shares all Members receive one vote each and the Annual General Meeting is where you make this vote count. Democratic Control is one of the cornerstones of the Credit Union movement and a key reason why Credit Unions are hugely successful in Ireland.

We look forward to seeing you there. 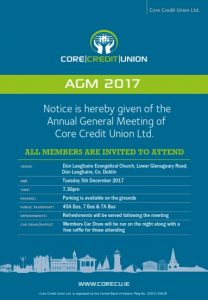